“What’s the matter with Romantic Sculpture?”

German scholars have played a significant role in the development of art history and Johann Joachim Winckelmann (1717-1768), considered by many to be one of its founding fathers, shaped the discipline greatly by introducing the concept of art criticism. Winckelmann had a seminal influence on 18th and 19th century German literature and culture and his writings on Ancient Greek art had a long-lasting impact on German writers and philosophers such as Lessing, Goethe, Kleist, Nietzsche, just to name a few.
Since both sculpture and statues play a key role in theoretical and literary texts of the Enlightenment, Romanticism, and Poetic Realism, it is critically important to examine their function, as well as their recurrence and disappearance at the beginning of the 20th century.

In her recent research, Catriona MacLeod (University of Pennsylvania) examines the question of why sculpture is both intensively discussed and yet rendered immaterial in German literature. She focuses on three forms of disappearance: sculpture’s vanishing as a legitimate art form at the beginning of the nineteenth century in German aesthetics, statues’ migration from the domain of high art into mass reproduction and popular culture, and sculpture’s dislodging and relocation into literary discourse. 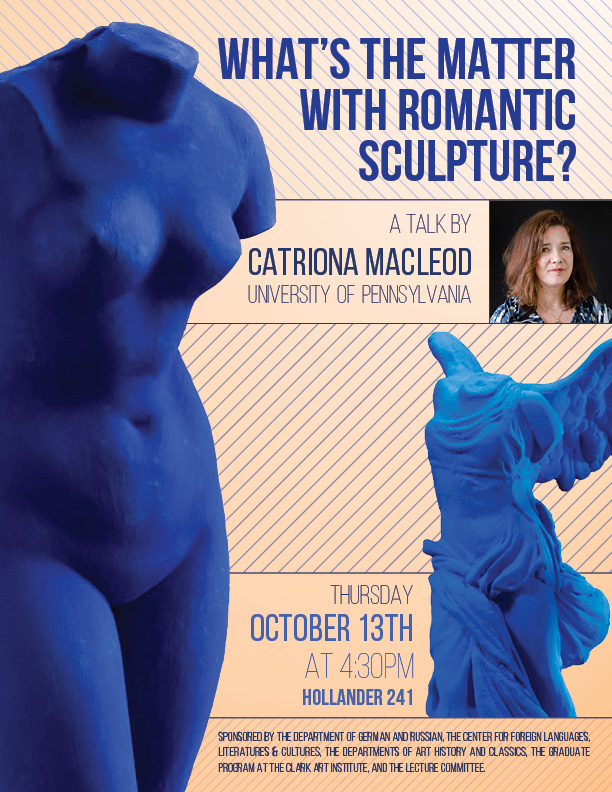 Covid-19 is an ongoing concern in our region, including on campus. Safety measures are in place, and campus community members and guests are additionally advised to take personal precautions. See the college's Covid-19 website for information about campus policies. For the latest research and recommendations from the CDC, visit cdc.gov/coronavirus.

Join students, foreign language TAs, and faculty for a meal in a language of your choice. All levels welcome.